I heard this morning that Cadbury® had finally got their long-awaited (by me, anyway) Fairtrade certification through on their plain Dairy Milk range of chocolate blocks and bars. Of course, I had to swing by the local consumer-mart to verify the rumours, and was delighted to return with... ahem... five blocks of the stuff. 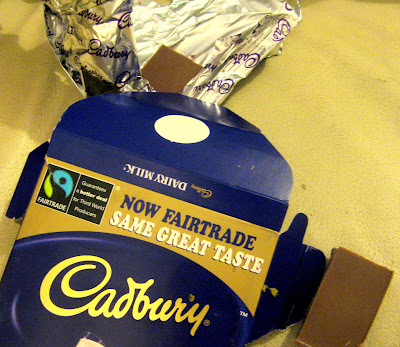 
You probably already know what 'Fairtrade' is all about, but here's the wrap from the Australia/New Zealand Website:


Fairtrade is about better prices,
decent working conditions,
local sustainability,
and fair terms of trade for farmers and workers in the developing world.
By requiring companies to pay sustainable prices,
Fairtrade addresses the injustices of conventional trade,
which traditionally discriminates against the poorest, weakest producers.
It enables them to improve their position and have more control over their lives.


This is PARTICULARLY important in the cocoa industry, where child trafficking and slavery continues to be rife.


Cadbury could, and should, still go a lot further in its efforts to source ethically-produced cocoa. However, it is still very exciting to see this move. Partly because the gauntlet has now been thrown down to other major companies to get onto the ethical bandwagon. But mostly because this means that the average Joe Consumer, for whom Fairtrade is an unknown or irrelevant concept, will still end up buying ethically-sourced chocolate.


And furthermore, the many many people who ARE educated about the importance of choosing Fairtrade - the people who understand and grieve the horrible injustices that young children suffer for the sake of a measly bit of chocolate, yet who continue to be swayed more by their wallets than their conscience - will now also have a cheaper, more readily-available source of Fairtrade chocolate.


I know how hard it is to value the living conditions of an unknown person in a far-off land over the lure of a cheaper and more readily available chocolate bar. In the last few years I've struggled with this temptation many times and failed. Hopefully, this move by Cadbury will make choosing the right option just a little easier for everyone.
Posted by Gina at 9:31 PM