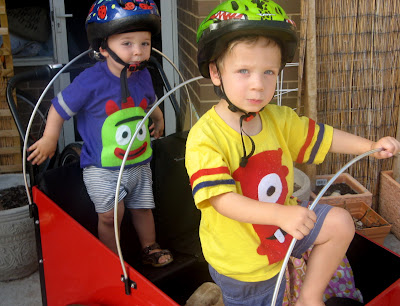 Karen from Urban Craft is one hip craftster. She likes to poke her tongue out at lots of things and make funny felty craft while she's at it. She's also totally on top of kiddy programming trends. And she's generous. She sent these shirts over for the boys.
What, you don't know who these creatures are? Muno and Brobee from Yo Gabba Gabba! It's retro, it's disco, it's education-via-beatboxing. Have you been hiding under a ROCK people?! Or just watching highbrow kiddy television like, um, err, that one with the books and real people in it? 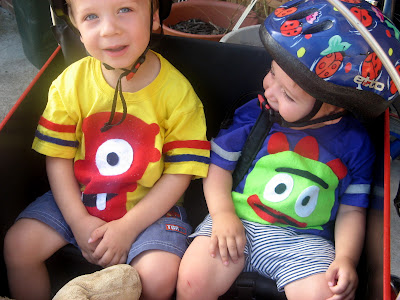 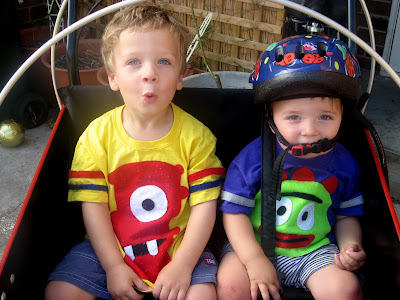 Suffice to say that these t shirts have gone down an absolute treat. The 3-year-old, whose preference right now is for nudity at all times, demanded to wear his as soon as the parcel was opened, and has barely taken it off since. The 1-year-old said 'car', which in his special dialect denotes approval.
Karen, you're so hot right now in the clutterpunk household. You've almost made my children feel like normal toddlers, a feeling they are mostly robbed of whilst I parade them around the inner city in our Christiania bike. Thanks for bringing a sense of normalcy (even if it is flourescent, 70s, alien-creature normalcy) to my little brood.
Posted by Gina at 11:06 PM