Running For The Kids

On Sunday, along with around 30,000 other people, I participated in the Run for the Kids, a fun-run held in order to raise money for the Royal Children's Hospital in Melbourne. Affectionately known in my household as the 'run from the kids', I've been gleefully dashing out the door 2 or 3 mornings a week for the past four months in order to ready myself for this race.

I opted to run the long course, which took us on a 14.38km route around the Docklands precinct in Melbourne, including going through the Burnley Tunnel and up over the Bolte Bridge. 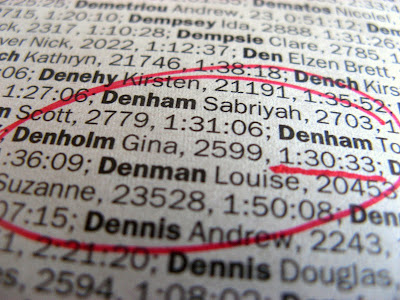 I'm thrilled that I ran the whole way. My focus was on endurance, on making the distance comfortably, not on speed. I'll never be about speed.

That said, I was happily surprised by my time. I kept a very cautious, slow pace throughout the race, constantly dropped myself down a notch in the exertion department, and tried to ignore the speedy demons rushing past (as well as the runners dropping off like flies as we approached the long inclines).

I can't say that I was in the 'Zone' while I ran. It was hot. People were smelly. It got boring. In fact I had to give myself a good talking-to at various points along the way to stay motivated and keep going. It was more of a mental than a physical battle, somehow.

However, the euphoria I felt as I ran over the finish line was unbeatable. So is the euphoria I continue to feel in knowing that I set myself a goal, I kept to it, and even I exceeded my own expectations.

Five months ago I could run for one minute. Now I can run for 1.5 hours.

If you're interested in running, but think you have absolutely no chance of ever getting off the couch, I really recommend reading the very motivating John Bingham's  No Need For Speed.
Posted by Gina at 2:24 PM