It's been a month since I first posted about the main clutterpunk household goal for 2010, 'decluttering the grocery shopping'. The brief: I want to move our household into a pattern of general food consumption that is low on waste, in line with the espoused social and environmental ethics of my family, and good for the family's health, wealth and use of time.

Well, there are lots of things I'd like to implement in our household. But in the spirit of eating the elephant one bite at a time, I've been trying to focus on better meal planning as the first thing to really work on. Many people who commented on my first post stressed the importance of planning their shops and menus in order to stick to a budget and cut back on waste and excess packaging. From the little I've done, I agree.

I can also see that planning the shopping in particular will help me to stick to certain ideals I have but don't always follow through on, such as
- buying only fairtrade coffee and chocolate products
- avoiding exploitative brands
- supporting Aussie-owned and made
- Eating less meat
- (eventually) moving entirely to organic meat/poultry
to name a few.

But... I find that I have a big problem with meal planning. You have to, um, PLAN. Not only does it take me hours to decide on a balanced array of family meals (without including all my favourite expensive ingredients), but also hours to figure out quantities, make sure that ingredients are seasonal and available, account for left-over bits and pieces, remember the regular items AND try to fit it into a budget... yuk! It takes a mere mortal like me half a day. Or it would, if I didn't just chuck in the towel and resort to the default on-the-fly-5pm-shop-visit-with-two-screaming-children style of 'meal planning'.

So, instead, I'm trialling something which actually does all of that hard work for me: 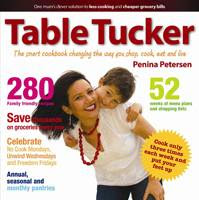 Webiste HERE.
The Table Tucker meal planning and recipe book is quite something. The deal is that the author, Penina Petersen, decided to plan a full year of dinner menus, with the aim of reducing cooking to three nights per week whilst still enjoying varied, balanced, seasonally-appropriate and frugal dinners. The book includes menus for 6 dinners per week, 52 weeks in the year, as well as annual, seasonal, monthly and weekly shopping lists so that you can choose to buy in bulk and be prepared.

Now before you think this is some paid promotion, and before you head off and buy it, let me say that we're still in our early stages of trying out the Table Tucker system. Prior to our recent travels and illnesses, we decided to use it strictly for two weeks. We don't have any dietary restrictions in our house so we felt free to try each recipe as it came.

There were some amazing benefits. These included:
- Shopping purposefully and quickly for specific items (I definitely spent less than usual)
- The great sense of time and freedom I found in cooking only 3 nights (even though I cooked two meals on those nights)
- Far better mental space for my boys in the hours before dinner, as well as time for them (we went for adventure walks around the neighbourhood)
- Far less food waste.

That said, I do have some reservations:
- It is so planned that I didn't want to think about deviating, which felt a bit restrictive
- It only plans dinners, no other meals
- Some of the meals we've tried are a bit odd to my taste
- There is a reliance on certain prepackaged foods like 'quick rice' which I dislike for lots of reasons
- Some meals are for 4-6 people, others are for 2 people, which is confusing

However, I think that my reservations will probably be overcome if we keep working with the system but learn to play around with the ingredients and flavours a bit.

So, this week we're getting back into the swing of it! Tomorrow I'll be checking our supplies and stocking up on the month's non-perishables, then getting this week's fruit, veg, meat and dairy. Where I get all of these and how, I will leave for another post...