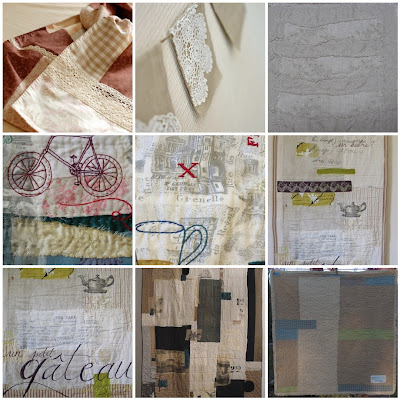 I couldn't pass up Tam's invitation to share some inspiration. I've been doing less making and more dreaming recently, and I'm starting to think about making a quilt/throw for the marital bed. Of course I have a zillion ideas I want to incorporate. I want it to be calm, muted, kind of ye olde worlde but also modern and funky, earthy but slightly frilly with a bit of doily action and maybe some thread sketchery oh and an ampersand or two. Are you with me?

So above I present to you my flickr craft crushes, very prominently featuring the work of the talented Tara Badcock, a textile artist of high calibre whose work I adore... errm, maybe I should just commission an artwork from her instead. Because she's hit the nail on the head precisely for me, and now anything I do will just be a cheap imitation. *SIGH*.

Whose work is floating your boat at the moment? Come and link in at 1/4 of an inch!