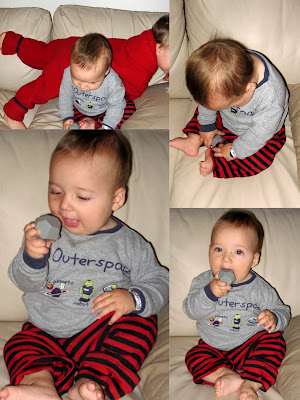 A few pics from this morning. Yes, it may be early now, but we've been up since 5am!

The poor bub was just sitting around, eating plastic toys and minding his own business (oh, and modelling his very new sewn-by-me YOGA PANTS, did I mention that?!!) when he was crash-tackled by the older brother.

The pants were sewn up yesterday afternoon during a fortuitously co-ordinated nap time. I scored a few metres of this stripey (cotton jersey-esque) material for small change at Savers on Tuesday. Thought I'd give Shannon's yoga pants for happy babies a go. It's a super-cute, super-easy introduction to the world of kids' pants, and I'm chuffed with the result, even though I used stretch material rather than straight. I did some extra top-stitching above the elastic waistband and around the hems, and used wider elastic because that's what I had on hand.

I know it's rather dumb to try something completely new using STRIPES, but a little wonk here and there just adds to their boutique charm, I reckon!

BTW Amityville is having a giveaway for her 100th post (hurrah!). Go on over and say hi, and maybe score yourself a little something.